This event rocks! Its our 7th year now so cant be bad. In short, it’s a mountain bike ride/enduro and beer festival with beer at the feed station. The event is held mid November every year, which ties up nicely with my birthday and even better this year being my 40th.
Myself and Mandi arrived on Friday morning, we tend to ride on the Friday just because we can and the area in so beautiful it’d be rude not to, however with Mandi’s elbow still healing she saved her energy until Saturdays event. I headed out with my friends to ride the 25mile, (40km) course, after 3 miles I headed back after my rear tyre blew off the rim 3 times splitting the bead. After it was fixed myself and Mandi hit the pub for mid day until about 01:30am!! That was the training!
Saturday morning, event day, we rode to the start ready and looking forward the great Welsh mountains, mud and a few cheeky beers enroute. I was riding my Jones SS and Mandi on her Singular Swift. We headed out straight into a small climb, Mandi’s chain broke, not having spares with her due to not wearing her pack as to keep the weight off her elbow no one else had a spare chain or link so she headed back to the b&b not happy. I wasn’t aware of the issues behind so I carried on in the mud ploughing away to get to the beer stop. A few mates met me there and told me about Mandi, which wasn’t the news I was hoping for, she was so looking forward to getting back on the MTB. We carried on through the quagmire, not sure if many of you know what Wales is like but it’s really wet and muddy this time of year and not a lot better in the summer but its great. A few friends didn’t recognise me as a 4inch front tyre without a crud catcher flings a fair amount of mud up! The course is pretty tame with ‘special’ sections off of the main route for the more experienced riders, no need to say we rode them. Some of the puddles were over the wheels and the mud in places was 6inches deep. With around a mile to go there was a river crossing so it was rude not to hit it hard and see if I could clean the bike up, it did a good job. We were missing a friend so we hung around here waiting when a friend suggested riding the bike off of the grassy bank dropping onto the river, this was so much fun!
I’ll be back next year for sure.
Go Pro video on board the Jones 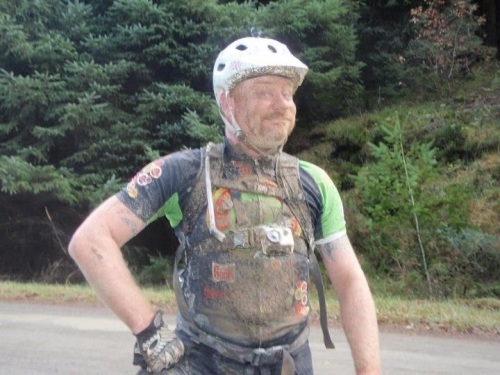