Born in Cologne, I live with my family (my wife and three children) in the middle of Germany near Mainz – Rheinhessen is unfortunately not a real mountain bike spot. The reason is that there’s only wine but no real mountains, just knolls. So I have to shuttle to Pfalz, Hunsrück and/or Binger Wald. Professionally I am working as a project manager in the media industry.

From childhood onwards the bike has been my preferred way to move forward. It was and is part of my hobbies (ride and tinker) and may also become a part of life. I renounce my car and handle just about anything with the bike – just using a ‘family taxi’ to shuttle the kids.
In my youth I have played icehockey for a long time, but with the beginning of the studies I had to find my lack of time a new sport. In 1988, the MTB-wave came just right. Well equipped with physical fitness, I joined a bikeshop team, initially on a Kona, a short time later on a Rocky Mountain Blizzard, which I rode till  2007. During this pioneer times there was the Grundig Challenge, Etto Dirt Bikecup and other events. Learning sports swimming – running was never an obstacle – I afforded a road bike in 2001 and then I attended a small triathlon. In 2003 I finished my first Ironman in Frankfurt, which I repeated in 2004 and
2006. Somewhere in between I got to know my dear wife and oops … there a few children got around now…

Cycling in nature always makes more fun for me (Xterra, Marathon and Tours) and so I bought my first 29er (Stumpjumper) in 2007. Further more 29ers come (and go), Surly Monkey, Cyclocross, Hero Mary SS, Gryphon…  2009 my custom built  NEUECK 29er, which I granted with after a long illness. Actually I did a design and construction for a 29er Titanium HT Enduro called ‘Pingar’.  Meanwhile, I ride road and off-road, racing, triathlon, cross, 29er, singlespeed and geard, day and night (since I have children), with and rarely without the beer (Kölsch) in my backpack. The fun is always in the foreground.
2013 I have some nice events being sought out and I try to represent the BWR team well. And maybe sometime I’ll try to finish an ironman again 🙂 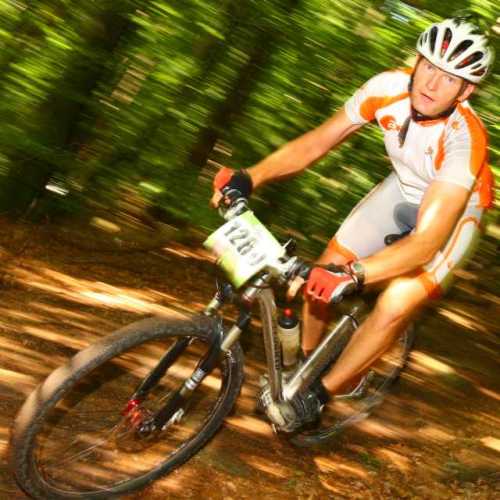