Just wanted to drop in and share some rides and race results from this season so far.

In March-April I returned to the States for 5 weeks where I took a needed break from Europe and rode like crazy, an estimated 60-70 hours in 5 weeks, which set me up with some fitness In May, which I parlayed into a month of climbing mtb rides around Dortmund alone or with my Spanish riding partner Alfredo and a handfull of subsequent 100+km rides by June, one down the Rhine after buying another used mtb in Andernach and riding it back as far as I could.  These rides were looking good, so I decided to race.

Since I am technically a college student I was able to compete as a collegiate athlete again for the first time this year since 2000, in the Deutsche Hochschulemeisterschaften.  The DHM was at Haltern-am-see, a ~150m high rocky uplift in the lippe/emsher geologic complex NRW covered in tall dark forest, with a fat boy time trial on Saturday and a cross country on Sunday.  We did it as a family vacation weekend and took the train out to Haltern Saturday and I pulled Jason in the trailor and Annika rode along side to Flaesheim (a dorf) where we spent the race weekend at an old Inn just 500m from the race start.  Long story short, I had terrible flat luck all weekend, but stuck it out and took home a result.  I double flatted before the start and at the line of the time trial but ultimately raced on a borrowed wheel and had a mediocre TT but which placed me in the top 40 of the 200+ field start the next day.  In the CC, I got a rock stuck in my shoe at the start and had to get off and pry it out, loosing lots of that place advantage, then flatted on the first lap at the top of the big climb, Fuck!  But I fixed my third flat for the weekend and fought back over the remaining 80 minutes and ended as the top TU Dortmund finisher and 10th overall in Germany in the student category, with 1000vm’s over 21km’s.  As is often the case, the top student winners were also factory pros who won our race (lapped me – reality check), and then also won the pro race later in the day.  Oh to be 20 again.  Its was also Jason’s first race and he was so excited from Saturday’s events that he didn’t sleep on Sat night, so Sunday I was tired…as were a few other racers who stayed in the same Inn, oops!  The organizers also miscategorized my number and placed me in Senor 1 in Fun results, not Collegiate, so Im not on the collegiate finishers list but if you look at Senior 1 I am listed as TU Dortmund and a comparison of my time to the collegiates shows I got 10th.

After the DHM I wet to Greece for 2 weeks and did a couple notable rides, one with over 2000vm’s over 4 hours on a mountain bike…the so called “Monopigado” ride.  The first photo is dropping into the valley before the big climb up to Monopigiado on the left showing the undulating Greek terrain it takes to get there, then the second one from above Monopigado looking across the other side to Mt. Chortiatis, a 1200 m non-active volcano I climbed on a trip in early 2014.

Upon return to Germany I did a tour around the Ijsselmeer in the Netherlands over 2 days with a buddy of mine.  What a blast, with the best being in Edam sitting on the canal eating a cheese sandwich and drinking an IPA…like we stepped back 700 years.  Here is an image from about half way across the 20km causeway riding out of a thunderstorm which came across the Ijsselmeer and just knicked us. 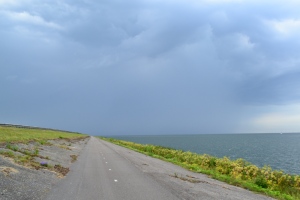